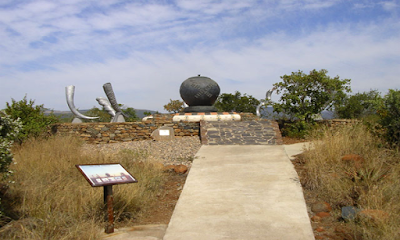 eMakhosini Opathe Heritage Park was established in the Valley of the Kings near the old capital of Zululand, Ulundi. It was first conceived as a game reserve with its prime objective being to protect the endangered black rhino. However, it was later recognized that the area has significant heritage value –  there are a number of burial sites of famous Zulu kings in the valley.

The idea to develop the land into a heritage site had been under discussion for some time and in 2001 the KZN Wildlife executive and the AMAFA Council, which was established in 1997 as a statutory body responsible for the protection and conservation of KwaZulu-Natal’s cultural and historic heritage, reached an agreement in terms of which the trust lands of the eMakhosini Valley and the Opathe Game Reserve were combined to form one protected area thus ensuring the conservation of nature and heritage in this unique 24000 ha park.

The valley was the birth place of King Shaka and Dingane and this is where Dingane fought his final battle with the Afrikaans Voortrekkers. Today the Zulu King Zweletini has his home in the valley. He established the Amakhosini Monument in 2003 to commemorate the spirits of his illustrious ancestors. It is set high on a hill overlooking the beautiful valley and is decorated with bronze plaques depicting scenes from Zulu history.
The game reserve has been re-stocked, largely by the World Wildlife Fund and is now home to black rhino, wildebeest, giraffe and buffalo.

Getting there:
Off the main tar road linking Melmoth and Vryheid, take the R66 to Ulundi. The main entrance to the Ophathe section of the park is on the right hand side of the road approximately 1 km before crossing the White Umfolozi River to Ulundi. Continuing on to Ulundi, take the turn-off to the airport, continue past the airport for approximately 6 km to reach Ondini Museum. Mgungundlovu and the Spirit of the Emakhosini Memorial have directional signage off the main road linking Melmoth and Vryheid. 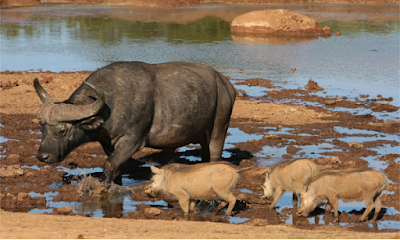 Mkhuze Game Reserve is situated in Northern Zululand, roughly 335 km from Durban. The reserve was established on 15 February 1912 and is 40 000 ha in extent. Today it forms part of the iSimangaliso Wetland Park.


Mkhuze in the iSimangaliso Wetland Park is well known for its excellent birding opportunities with at least 400 species present, but that's not all. This KwaZulu-Natal nature reserve offers great contrasts and therefore a wide range of wildlife habitats.
Animals present in the reserve include Elephant, Black and White Rhino, Wild Dog, Hippo and Blue Wildebeest, Giraffe, Eland and Kudu plus many other antelope species. Rarer animals that live in the reserve include Cheetah, Leopard, Hyena and Suni.
Mkuze is made up of mostly dry and flat landscapes which are broken by ancient dunes that have turned into sandy ridges. You'll also find rare sand forest, riverine forest, swamps and acacia savannah leading to the Lebombo Mountains in the west.

Accommodation is mainly at Mantuma which offers a variety of options including chalets, cottages, rest huts and campsites. There is also the Nhlonhlela Bush Camp which has an 8-bed lodge.
Gate entry times: Summer (1 October – 31 March) 05:00 – 19:00, Winter (1 April – 30 September) 06:00 – 18:00. These times are strictly enforced.

Getting there: From the south, the turn-off to the uMkhuze Game Reserve is signposted 35 km north of Hluhluwe. From this point, the road is gravel. Approximately 15 km further turn right onto another signposted road through the Lebombo mountains. The entrance is 10 km along this road and the route is clearly signposted.

Visitors from the north should take the road through Mkuze Village, which is 18 km from the entrance gate and 28 km from Mantuma camp. This road is well signposted.